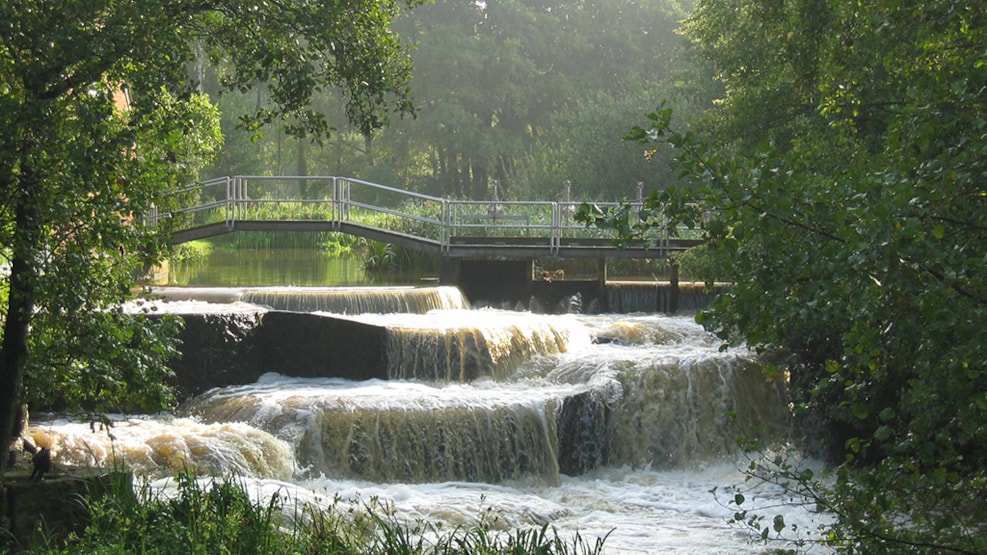 The fish stairway at Brende Mølle

Brende Mølle’s old millpond has now been restored as a wetland area. Both the redirected river and the fish stairway allow wildlife free passage through the area.

The dam at Brende Mølle had used hydropower since the 16th century – most recently from 1912 to the end of the 1970s. Its use has now ended permanently and the buildings have been restored with respect for their original appearance.

Brende Mølle – conservation of a wetland
After 400 years of damming, the mill pond had established a valuable wetland area, which unfortunately prevented the free passage of fauna.
An unorthodox project was launched that would accommodate the conflicting goals of maintaining the existence of the dam and mill pond, while ensuring unhindered passage for fauna. It involved redirecting the river south of the mill pond and building a “fish stairway”. The fish stairway and fauna passage were built during the summer of 1990 and the public has full access to this beautiful natural area via a network of footpaths.

Brende Mølle and the fish stairway are located about 4.5 km from the mouth of the Brende Å river at Tanderup/Håre near Gelsted.

A brochure can be downloaded here – Brende Ådal