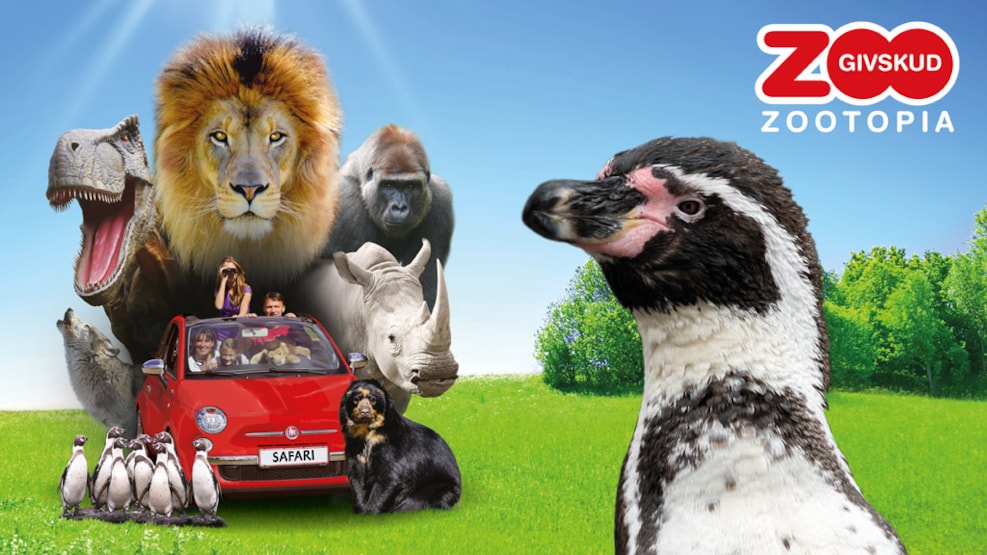 Experience a safari tour of GIVSKUD ZOO – ZOOTOPIA in your own car with full view. Explore the zoo on foot and meet gorillas, elephants and wolves, and end the day with a visit to one of the large playgrounds.

Enjoy an amazing day at GIVSKUD ZOO. Here, you can head out on a safari tour in your own car or take one of GIVSKUD ZOO’s safari buses. Get close-up to the animals and drive across the African savannas where the rhinos roam and where giraffes and zebras cross the road right in front of you.

Continue into the lions’ territory and sense the thrill as the big cats prowl around your car. Enjoy a stroll between the safari tours and meet the zoo animals, such as spiders, gorillas, giant otters and spectacled bears, which can be experienced in Europe’s largest dedicated habitat for spectacled bears.

GIVSKUD ZOO also has Denmark’s largest dinosaur exhibition. Here, there are 50 different full-sized dinosaurs, ranging from the very largest herbivores reaching a height of about 40 metres to the deadly carnivore, T-Rex.

In 2020, you can experience GIVSKUD ZOO’s brand-new bongo habitat, where rare antelopes stroll between trees and shrubs. The habitat has been established in connection with a new path and walkway that ties the park together, making it possible to walk all the way through GIVSKUD ZOO – a journey of just over six kilometres.

Also look forward to experiencing the park’s special exhibitions "Back to the Ice Age", "Plastic Planet", "Inspiratorium" and "Cabin of Death".

In addition to many exciting animal experiences, GIVSKUD ZOO also offers playful fun and quality time for young and old alike. Enjoy the park’s small oases and let the children burn their energy in the large playgrounds where, among other things, they can challenge themselves to the nine-metre tall "Skywalk" play-tower, while their parents relax.

The park is located close to the motorway between Vejle and Herning, just a 20-minute drive from Billund and Vejle.