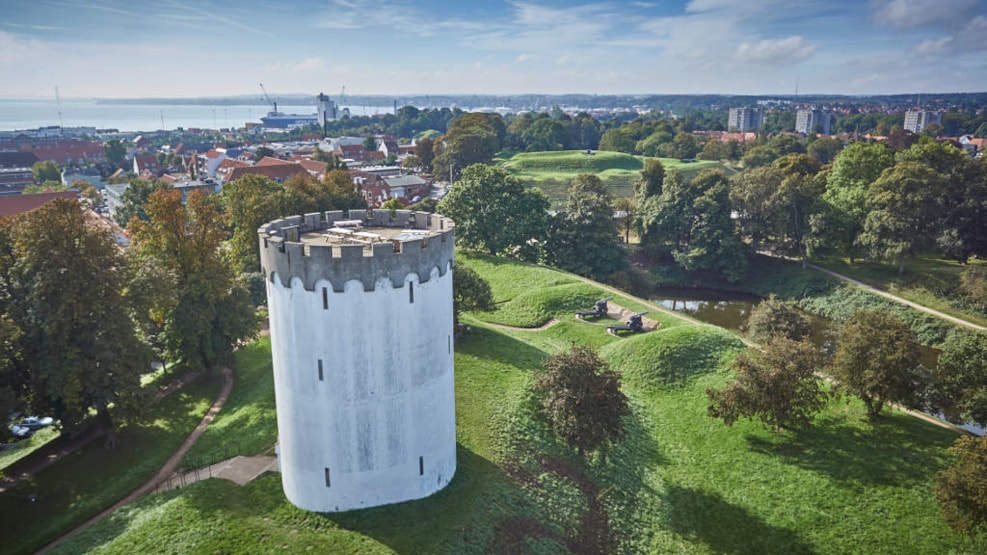 The Ramparts of Fredericia

Fredericia is home to one of the largest and most well-preserved ramparts in Northern Europe with bastions, ravelins, moats and cannons. Today, the great and protected fortification forms a peaceful and beautiful frame around the oldest part of Fredericia, and The Ramparts offer great nature and historical experiences for the entire family.

Experience the Ramparts
Fredericia Ramparts is a green oasis with a rich nature and wild life, which can be experienced from the many trails in the area. The trails passes by wild thickets, the lowlaying areas around the moats, The Playground of The Ramparts and grassland. If you're lucky, you might be able to see a flag woodpecker or a roe deer on your hiking trip. The Ramparts has several lookout pointsas well, which provides a great view over the town of Fredericia and The Little Belt.

If you need a break during your tour around the fortification, you can use the benches and tables, which are placed along the hiking trails. You can also make a stop and explore the many old canons, which are placed on the bastions and close to The White Water Tower, or visit The Statue of The Brave Soldier, the landmark of Fredericia. Because The Ramparts continues all the way to the seaside, you can combine your hiking trip with a trip to the family-friendly beach Østerstrand as well.

The trails which cover the fortification are about 18 km long altogether and easy accessed from many stairs and paths on both sides af The Ramparts. Because of this, The Ramparts is not only a tourist attraction or a hiking spot but also a passageway to the city-centre of Fredericia and is used by the locals as an urban park.

The Ramparts is of the biggest urban parks in Denmark and now adorned by many beautiful old trees. But back in the days, when the fortification was an active military fortress, the only growth on the area were grass and hawthorne. The hawthorne was planted at the draff between the inner slopes of the rampart and the moat and served as barbed wire at that time. The hawthorne plantation were maintained by a "Thorne Master" who had the job of weaving the hawthorne branches into an impenetrable network. Hawthorne are still a dominating plantation on The Ramparts today.

VisitLillebælt - Fredericia arranges a series of guided tours all year round at The Ramparts - both for individuals and groups.

The history of the Ramparts
The Ramparts were built in 1650 to strengthen Denmark's defences in a time of war in Europe and functioned as an active fortification until 1909. The construction of the fortification were inspired by a contemporary trend, which favoured the founding of a new fortification and a new city as a joint entity instead of adding a new fortification to an already existing city. Because of this, Fredericia is one of the few Danish cities which has been founded as a fortification in a location with no prior inhabitants. Local peasants, soldiers and convicts were used for construction work.

The periphery of the original fortification is about 4600 metres in total and occupies an area of about 100 hectares including the moats. The rampart facing land is the most massive and about 1800 metres long. The other two ramparts by the water, one facing south and one facing east are 1400 metre long and less massive. The fortification is constructed with 7 bastions and 2 half-bastions, which gives the Ramparts its distinctive angular-looking shape.

Originally, the ramparts occupied an area of about 100 hectares when including the moat, and the town area inside the ramparts took up about 103 hectares. Today the city and its modern infrastructure takes up more space and the ramparts are somewhat smaller. Especially the south facing rampart has been removed to clear space for the harbour. The eastern rampart is still there and covers the distance from the citadel past the beach Østerstrand to the corner where the eastern rampart meets the larger land-facing rampart.

You can read and learn more about the fascinating history of the construction and use of The Ramparts on the website of Fredericia Museum. Here, you can find more information about The Battle of Fredericia on 6th of July 1849, which resulted in one of the most important victories in Danish history of warfare as well.

Information and parking facilities
If you want more information about Fredericias role as a royal fortification, about the local attractions and planned events, and link to our very own podcast about the history of Fredericia, you can find it here. All year, Visit Fredericia have scheduled guided tours with different themes, which you can join as well - se more information here.

You'll find parking facilities all the way along the inner side of the ramparts and in the city-centre. Both the parking lot at Norgesgade North, the parking spots along Øster Voldgade and the parking lot by The Statue of the Brave Soldier are in a walking distance from The Ramparts.