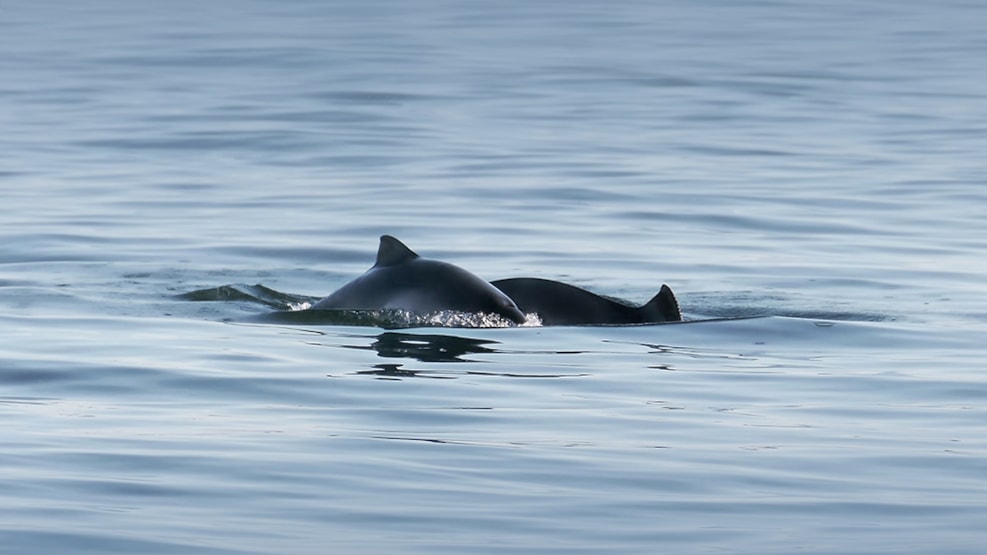 The porpoise is one of the smallest whales in the world.

The porpoise is by definition a whale because it is an aquatic mammal with a streamlined body: its tail has evolved into a horizontally positioned fin (for propulsion), its front limbs have become stiff flippers (for steering), its hind limbs are missing, it has no outer ear and no fur. The porpoise belongs to the group of toothed (or ordontocete) whales (which have teeth instead of baleen plates) and to the porpoise family because its upper and lower jaws do not form an outer beak as in the dolphin family.

On land, the porpoise appears to be black and white in appearance, but when in the water, it appears grey because it is dark on the upper side where the light will make it a brighter hue, and light on the underside where the shadows will make it darker. This makes it difficult for predators like orcas (or killer whales) to spot porpoises in cloudy water.

The waters of the Little Belt are one of the places where you can regularly see porpoises during the summer months, and there are also many young porpoises swimming about too. When they are here, it is because there is food for them, especially in the form of shoals of fish in the open bodies of water. Along the coasts, however, they will also be able to find bottom-dwelling fish like the round goby and the viviparous eelpout.

Porpoises can be spotted in the Little Belt from April to September, but they are most common in May, June, July and August. If you are lucky, you can see a few of them during the winter period. Good observation points from the shore are the harbours of Middelfart and Fredericia, from Galsklint, from Strandvejen by the kiosk, Strib Nordstrand and Røjle Klint.

From June to September, you can go on “Whale safari” trips on the Little Belt.